A Taste of Sicily

Seven years ago, Wegmans Food Markets, Inc., Central New York’s leading supermarket chain, honored me with a Roman banquet. To this day, I don’t know whether this boon was random or deliberate, whether fortune or demographics had smiled on me. But on the eve of Columbus Day, a package arrived at my home containing a video tape and an autopen letter from president Danny Wegman stamped with the company logo. “DR. DI RENZO,” the letter announced, “WEGMANS INVITES YOU TO SAVOR A TRUE TASTE OF SICILY!”

The accompanying tape was a recording of a Wegmans television special broadcast in March and promoting the chain’s Italian Classics line, a staple in my kitchen ever since I moved to Ithaca and left behind the ethnic groceries of Syracuse’s Little Italy. Lead by Nella Neek, a “recipe-development specialist,” a team had journeyed to Sicily to research its culture and cuisine. Traveling through Palermo, Agrigento, Catania and Trapani, the team had located many folk dishes. The noted chef Marchesa Anna Tasca Lanza would teach Wegmans shoppers how to cook like a Sicilian.

Curious, I popped the tape into the VCR. On the screen appeared a thirty-something, vaguely Italianate woman with a soap bowl haircut, standing on a hill overlooking Agrigento’s Valle dei Templi. Her suburban manner and Eddie Bauer wardrobe transformed the Greek ruins into a picnic ground. “Greetings from the sunny Mediterranean!” she hailed. (“Salve!” I returned.) “Join us as we explore Wegmans’ latest discovery in our search to help bring your family the great tastes of Italy. I’m Nella Neeck, and welcome to Sicily! Stay tuned as we explore this magical Mediterranean isle and learn how to bring an easy, authentic Sicilian meal to your table.”

Easy and authentic? Lady, nothing authentic is easy. My Sicilian Nonna spent weeks preparing Seven Sacrament Salad, an elaborate seafood marinade served on Christmas Eve. Now she is dead, and so are the relatives for whom she cooked. Their voices haunted the soundtrack as a synthesized chorus of ancestral ghosts hummed an ancient hymn, the same ethnic wailing heard in Gladiator and other sword and sandals epics. As the wordless chant continued, Sicilian landmarks appeared in a series of dissolves: the fluted colonnade of the Temple of Hera; a flowering almond orchard in Piana degli Albanesi; the Arab domes of San Giovanni degli Eremiti; the neoclassical façade of the Teatro Massimo Opera House, the frieze from Palermo’s Triumphal Arch; the Norman Cathedral of Monreale. Beneath these time-stained monuments scrolled titles in decorative script: “History . . . tradition . . . authenticity . . . passion!”

Familiar sights. As a toddler, I had spent a year in Sicily recovering from a near-fatal case of dysentery contracted during a family vacation in Abruzzo. The doctors had recommended sea air and a citrus diet, so my mother spirited me to her hometown of Villabate, a suburb of Palermo, where a prolonged convalescence formed a treasure chest of memories. But Wegmans had plundered these memories for its broadcast: Terra-cotta roof tiles baked in the sun, rake-armed field hands harvested ripened olives, wheels of Peccorino Romano cured al fresco, painted donkey carts displayed scenes from The Song of Roland, colorful fishing boats bobbed in the harbor at Mondello, and shoppers haggled in the Vucciria Market. Even Verres, the Roman governor whom Cicero prosecuted for graft and extortion, never turned Persephone’s Island into an infomercial. Still, coping with chronic poverty, the Sicilians probably felt lucky to participate in a promotional video. They have made the most of cooking and public relations for twenty-five centuries.

Sicily’s cuisine has been shaped by a tragic past: “The list of those who have invaded and conquered Sicily is a long one,” Nella explained, “from Phoenicians and Greeks to Romans and Spaniards. No wonder Sicily’s tourism slogan says, ‘INVADE SICILY: EVERYONE ELSE HAS!’” These invaders brought their own gods and their own food, as every Sicilian pantry testifies: raisins, introduced by Arabs; tomatoes, brought by Spaniards; olives from ancient Greeks. “Sicily is the world’s saucepan,” Nonna once said. “Everyone minces us, but we simmer and thicken.” Under Rome, Sicily made the best of subjugation. Once the island became the imperial granary, its political power became as depleted as its soil. Nevertheless, it experienced trickle-down prosperity. Despite exploitation, the Capital admired the food and cooking of its provincial cousins. Wegmans, the phalanx of a new empire, followed an ancient pattern. It had captured a Sicilian marchesa to teach American soccer moms how to prepare involtini di melanzane con capellini, fried eggplant rolls stuffed with angel hair; but in exchange, it helped local business and boosted agriturismo.

Peace has her victories, no less renowned than war. 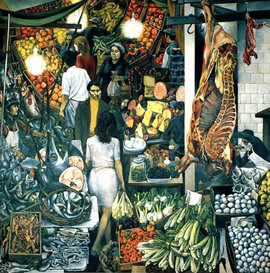