Modica is the chocolate capital of Sicily. Located in the southeastern province of Ragusa, it straddles a gorge in the Iblean Mountains. Shaped by four hills, the town is divided into two parts—Modica Alta, whose amber-colored buildings scaled the cliffs, and Modica Bassa, at the bottom of the valley—and joined by a maze of streets and steps. Modica is breathtaking, but its precarious beauty is menaced by distant Mount Etna. On January 11, 1693, an earthquake devastated the entire region, killing 2,400 Modicani. Rising from the ashes, the town never forgot that sudden disaster. How could it, when its splendid Baroque buildings, its walks and streets, were built from or cobbled with the rubble?

But until 1902, flood had menaced as often as fire. Once Modica was the Venice of Sicily; its many bridges had spanned the Ianni Mauro and Pozzo dei Pruni, which joined the Monticano River and flowed into the Noto Valley. But after a deluge, engineers diverted and filled the two streams to create Corso Umberto, the town’s main avenue and historic center. Now the only thing flowing through Modica was an Arno of chocolate.

Dark and acrid, Modican chocolate is unadulterated by the milk of human kindness; its atavistic flavor replicates that of xocatl, the Mexican cocoa first brought to Europe in 1528.  Perhaps the most prized booty of the Spanish conquest, more refined in its cruelty than cocaine, xocatl was a product of war and extortion. The Maya, who flourished eight centuries before Cortez, venerated this black gold, as evident from the ornate chocolate vessels, made of clay, found in their tombs. According to myth, Quetzalcoatl the Plumed Serpent bestowed cacao to the Maya after the divine grandmother goddess Xmucane created humans from maize. The grateful Maya held a festival each April for the cacao god, Ek Chuah, whose headdressed priests offered feathers and incense before sacrificing a dog with cacao-colored markings. Xoactl (literally “bitter water”) became a sacramental wine. Throughout the Yucatan and other coastal areas, cocoa consecrated Mayan weddings. To seal their union, a bride and groom would drink chocolate from a common goblet.

But for the Aztecs, who dominated central Mexico, cocoa symbolized the power and glory of their vast empire. The god kings demanded a yearly tribute of 980 loads of cacao, painstakingly counted out into 24,000 beans per load. The proceeds provided the chocolate that capped Montezuma’s lavish banquets, as well as the household staples sold in Tenochtitlan’s crowded markets. Cacao also was used as currency: four beans could buy a wild turkey, one hundred a slave. Not surprisingly, counterfeiting was rampant. Swindlers would stuff cacao shells with clay or packed earth, despite the penalty of dismemberment. Officials rarely enforced the law, however, because such chicanery targeted the poor, who would drink mud if the priests told them it was xoactl. Naturally, merchants reserved the finest cocoa for the rich, who flavored their drinks with sesame, anise, vanilla, allspice, ground corn, honey, and chiles.

Royal chocolate, however, contained various dried and powdered aromatic flowers with special properties. Before the emperor visited his harem, palace chefs laced his cocoa with an extract of magnolia mexicana, to enhance potency. Using a molinillo, a wooden stick with a fluted head, they whipped the mixture into a creamy froth and served it to Montezuma, who, toasting the fertility goddess Xochiquetzalli, quaffed fifty golden cups of this elixir at one sitting. Each sip, he told his Spanish guests, brought wisdom and vitality. But not all libations, the conquistadors discovered, were innocent. The Aztecs served cocoa to sacrificial victims before eviscerating them. This custom came from the Maya, whose cooks sometimes added achiote, a dark red seasoning paste, to their chocolate to produce a deep red color. Most likely, this dark red seasoning substituted for human blood.

These rituals revolted the Spanish, but they quickly succumbed to chocolate because of its caffeine. Writing to Charles V in 1519, Cortez reported, “A cup of this miraculous beverage gives every soldier the strength to march for an entire day.” This effect should not surprise us. Chocolate was the first stimulant these Europeans had encountered, decades before coffee or tea. A 16th-century Italian traveler, who smuggled cocoa back to Florence, claimed the New World Spanish were “addicted” to chocolate. Actually, they were hooked on greed. When a triumphant Cortez returned to Madrid, chamberlains stockpiled cocoa beans in an underground vault, along with gold, jewels, and painted skulls. Entrusted with the Aztec recipe, monasteries processed the beans and kept chocolate a lucrative state secret for nearly a century.

To maximize profits, Spain planted cocoa trees in Sicily, an Aragonese fiefdom for two hundred years. That was how Modica became the empire’s most important chocolate center after Alicante. Philip II granted the town a corporate charter for three reasons: its unquestioning loyalty to the crown; its North African climate, so similar to that of the Mesoamerican peninsula; and its plentiful supply of lava stone, essential for preparing chocolate the ancient Aztec way. The resulting prosperity transformed Modica. Spanish chroniclers called the city “an island within the island, a kingdom within the kingdom,” and the provincial nobility, the Chiaramonte, the Cabrera, and the Henriquez, became notorious for their extravagance. Lords dined on such exotic dishes as ‘mpanatigghi, a bizarre but delicate blend of raw mincemeat and cocoa, and u lebbru ‘nciucculattatu, wild rabbit cooked in chocolate. Ladies drank hot cocoa in church, even during Lent, claiming it prevented fainting during high mass.

A Dominican priest denounced the practice. Drinking chocolate in church violated the fast laws, he thundered from the pulpit. Noblewomen and their entourage boycotted his church, and an assassin dispatched the impertinent cleric with a mug of poisoned chocolate. The scandal prompted the Archbishop of Syracuse to consult Pope Alexander VII, who in 1662 declared: “Liquidum non frangit jejunum.” Liquids (including chocolate) do not break a fast.

By the 18th century, the Spanish empire had vanished, but the ciucculattari still ruled. Soliciting door-to-door in Modica’s most affluent neighborhoods, these vendors pushed colorful carts containing pre-roasted cocoa beans; sugar, vanilla, cinnamon, and spices; a stone bowl and pestle; and a charcoal brazier. They ground, mixed, and seasoned the beans to order and then heated the powder until the cocoa butter melted, but before the sugar fully dissolved. Poured into a tin mold, the goop hardened into a crystal-studded bar. Thus street peddlers preserved Modica’s aristocratic chocolate, albeit in a diminished and domesticated form.

The Bonajuto family had been ciucculattari for four generations, until Federico Bonajuto in 1827 upgraded his pushcart into a small pastry shop. His son Francesco, nicknamed Ciccio, transformed the store into regional enterprise. Mass-production methods introduced at the dawn of the 19th century had transformed chocolate manufacture. The steam engine made ground cocoa beans to produce large amounts of chocolate cheaply and quickly. Greater quantities reduced steep prices, and for the first time the masses could afford chocolate.

Ciccio’s small factory, built in 1880, applied the Industrial Revolution to cioccolatto modicano but without compromising quality. Although innovation had its place, some traditions were sacrosanct. For example, Bonajuto bucked the new trend set by Daniel Peter and omitted milk. Let the Swiss suck their mother’s tits! Sicilians craved the taste of catastrophe. Likewise, he avoided conching, refining and mellowing his chocolate in a shell-shaped container of beads. He wanted his product to be gritty and bold. A perfectionist, Bonajuto controlled every stage of production, from growing his own cacao trees to designing and distributing his own advertising, and his face became as familiar in Italian stores as King Umberto’s. In 1911, he won the Grand Gold Medal at Rome’s International Exhibition. Palermo and Catania celebrated with fireworks.

But not everyone rejoiced at Bonajuto’s success. Old Red Shirts and young Communists considered Sicily’s chocolate craze decadent, a frivolity typifying the age’s betrayal of heroic political action. Even the most ambitious and energetic Tancredi, they mumbled, become a lotus eater after eating a Bonajuto bar. Not all the absinthe served at the Palermo Palmes, not all the opium distilled from the poppies in Enna, softened the brain like Bonajuto chocolate. They were right. I have tasted Modican chocolate only once, and the experience nearly killed me. Used to the bland Hershey bars of suburban New Jersey, I expected something smooth and mild. Instead, when I bit into the crunchy outer shell, I found myself chewing a granola of honeyed beetles. Numerous sugar crystals numbed my palate, while a raw powder—thick and pasty as volcanic ash—paralyzed my tongue. Traumatized, my taste buds recoiled and stumbled into a mine field of red pepper flakes, cloves, nutmeg, and allspice. Just as the agony became unbearable, molten velvet soothed my tongue, and a warm bliss settled on me like the descent of the Holy Ghost. For all I knew, I had experienced Nirvana. The shock obliterated my will and consciousness, and I gladly drowned in an ocean of chocolate. Shipwreck was sweet in such a sea.

But when the rush subsided, I felt miserable. From a god, I reverted to a worm. That is the danger of Sicilian chocolate. “Tasting Modican chocolate,” explains the novelist Leonardo Sciascia “is like reaching a Platonic archetype, the absolute. Chocolate produced elsewhere, even the most celebrated, is an adulteration, a corruption of the original.” And the physical world itself becomes a dingy shadow of the ideal. 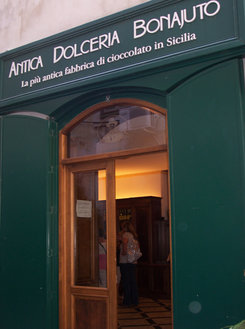 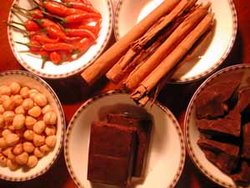