When sixteen-year-old Andrea D’Arrigo emigrated from Messina, Sicily in 1904, passing through Ellis Island before settling in Boston, he brought only two things: the dream of making a new life in America and a small pouch of broccoli seeds. Unlike Jack in the Beanstalk, Andrea spoke no English, but hard work made the loneliness bearable until his younger brother Stefano arrived seven years later.

The D’Arrigo brothers learned English, earned engineering degrees, and joined the army in World War One. Andrea fought in France under General John J. Pershing, but even a personal reference from Black Jack himself would have been useless in the postwar job market. Forget engineering or, for that matter, construction. The brothers could not find work as organ grinders or ice-cream vendors. After a half dozen aborted odd jobs, including being “hods” or cobblestone carriers, they joined a roadside farmers market. Back then, the produce industry consisted of the local summer season; for eight months of the year, fresh fruits and vegetables were unavailable. Andrea and Stefano would change that.

The two brothers loved produce. Perhaps it was in their blood. They partnered with their cousins in the Boston Fruit and Grape Company and learned the business. Stefano moved to California to direct the purchasing of grapes, while Andrea remained in Boston to sell. By 1923, they had broken with their cousins and started the D’Arrigo Brothers Company of Massachusetts, but their success resulted from California dreaming.

Drawn to the warmth of its strong Italian community, Stefano moved his wife and sons, Steve and Andy, to San Jose. Here and on scouting trips for grapes, Stefano found the produce of his childhood—broccoli, cardoon, fennel, and prickly pear—being grown by Sicilian immigrants. This discovery inspired the first trial planting of commercially grown broccoli from the still-vital seeds in Andrea’s pouch. Later that year, the brothers pioneered the first transcontinental rail shipment of ice-packed broccoli from the West to the East Coast, but their greatest innovations were in marketing and advertising.

As demand grew, Stefano sought a summer climate with a long growing season and introduced broccoli to the Salinas Valley. Eventually, the company’s 28-acre operation would expand to 25,000 crop acres in two states, thanks to diversification. After World War Two, it entered the lettuce market and, in the words of Jimmy Durante, “made a lot of scarol”: escarole but also money. By stocking ethnic specialties in early supermarkets, Andy D’Arrigo, who had succeeded father Stefano, conquered suburbia. His greatest accomplishment was introducing broccoli rabe in 1964. Visiting Sicily, he gathered seeds from wild mustard plants growing along the cliffs of Messina, crossed them with California turnip broccoli, patented the hybrid, and copyrighted the name.

After Pat’s honeymoon, his Italian father visits and asks if the bride is pregnant. Pat demurs. He has been married for less than a month. What does Papa expect? A boy, that’s what! And Pat can guarantee it if he eats broccoli. For seven years, Pat obeys until his tool becomes a bean pole. Pat finally begets a son, but the kid is born green.

Country-club Wasps cringed. It was bad enough these vulgarians had invaded the suburbs and served broccoli rabe at Fourth of July cookouts. A fifth column of Ivy League nutritionists, determined to turn Americans into rabbits, aided and abetted them. “It’s broccoli, dear,” wheedles the mother in a Carl Rose New Yorker cartoon. To which her recalcitrant tot retorts: “I say it’s spinach, and I say the hell with it!”

When the white elite recaptured the country, produce became a hot-button issue. Upon becoming America’s 41st president, George Herbert Walker Bush banned broccoli from the White House and Air Force One. “I do not like broccoli,” he announced at a press conference. “And I haven’t liked it since I was a little kid and my mother made me eat it. And I’m President of the United States and I’m not going to eat any more.”

Andy Boy protested by sending crates of broccoli to the Oval Office, but the First Lady unloaded the stash on various Washington food banks. Relations would not improve until her son Dubyuh posed with Broccoli Man, the mascot of the National Broccoli Growers Association, on the campaign trail.

“I like the tops,” he told reporters, “but not the stalks.”

After his election, Dubyuh sent Broccoli Man a thank-you card printed on Oval Office stationery. No other vegetable could boast about receiving a mash note from the White House, unless you count the corn and soy lobby, but Andy Boy had the last laugh. When Dubyu visited Indonesia, a witch doctor threatened to turn him into a stalk of broccoli. The publicity department pinned the clipping on the bulletin board, to divert attention from the company’s chronic labor problems. Back in August 1998, when D’Arrigo Brothers introduced harvesting machines in its broccoli rabe fields, two-thirds of the work force had walked out. The local papers called the strike the Rabe of Wrath. 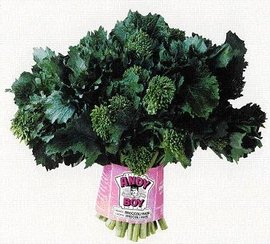