"In his 1943 novel The Glass Bead Game, Herman Hesse anticipated the sort of world traditional humanists want---and its failure. The book depicts a brotherhood of intellectuals, artists, and humanists who live a life of splendid isolation, dedicated to the Great Tradition, its wisdom and its beauty. But the hero, the most accomplished Master of the Brotherhood, decides in the end to return to polluted, vulgar, turbulent, strife-torn, money-grubbing reality---for his values are only fool's gold unless they have a relevance to the world."

FROM THE CLOISTER TO THE MARKET

As a first-generation college student whose first language is not English (and whose thrifty immigrant parents refused to pay for his college education unless it served some practical end), I know how writing for the academy can be as painful and alienating as emigration. Like assimilation, literacy comes with an inevitable price; but as the Sicilian proverb says: "Take what you want, and pay for it."  Accordingly, I treat academic writing as a self-conscious process of "naturalization," pledging citizenship to an often baffling community that does not necessarily have one's best interests at heart. Most college students, after all, pursue an education primarily to secure a career.

Nearly forty years ago, management guru Peter Drucker predicted our economy would be served primarily (and most effectively) by knowledge workers, “those who put to work what they have between their ears rather than the brawn of their muscles or the skill of their hands.” For a free market to serve a free society, he argued, young people must become informed, ethical, and articulate communicators, not just as students but as professionals and citizens in a commercial, technocratic democracy.

The Scientific and Industrial Revolutions, Drucker argued, created America; but their impact on the Academy has been a mixed blessing. On the one hand, capitalism and technology created mass literacy and promoted the ideal of universal public education. On the other hand, from its very inception, our system’s relentless dedication to the bottom line has challenged, perhaps, threatened, the very concept of the liberal arts. As colleges are forced to become more practical, cost-effective, and consumer-centered, do they fulfill or betray their humanist mission?

These controversies predate current concerns about for-profit schools and long-distance learning and package deals. They can be found in the writings of Sir Francis Bacon and Adam Smith, whose ideas laid the foundation of our world. As evident in Charles Dickens’ Hard Times, in the curricular debates between Matthew Arnold and Thomas Huxley, in the education of economist John Stuart Mill, the marketplace since the early 19th century has bred competing ideas about higher education, according to class, economic demand, and political ideology.

But what does a liberal arts education mean in the early 21st-century? How can writing well in the classroom teach colelge students, whatever their major, to communicate well in the public and private sectors? Above all, how does education relate to personal and professional ethics and to traditional liberalism's vision of a free, just, and progressive society? To answer these questions, my section of Academic Writing I (WRTG-10600) examine the development, dynamics, and meaning of American business and science through the lenses of different disciplines: anthropology, economics, history, politics, psychology, sociology, even literature.

Appropriately, the course focuses on the life and work of Benjamin Franklin. The youngest son of a poor candlemaker, Franklin began his career as a printer and bookseller. By improvising a broad education and capitalizing on a gift for words, he became succesful editor, publisher, entrepreneur, inventor, scientist, legislator, and ambassador. His organizational and rhetorical stragies for communicating intelligently and effectively in the academy, the marketplace, and the assembly remain fresh and instructive, as do the problems and pradoxes of the intellectual, commercial, and political worlds that formed him.

Franklin believed that the best education teaches students "everything that is useful and ornamental." In the conclusion to its 2002 report Greater Expectations: The Commitment to Quality as a Nation Goes to College, the Association of American Colleges and Universities  urges "an end to the traditional, artificial distinction between liberal and practical education. Liberal education in all fields will have the strongest impact when studies look beyond the classroom to the world's major questions, asking students to apply their developing analytical and communication skills and their ethical judgment to significant problems in the world around them." 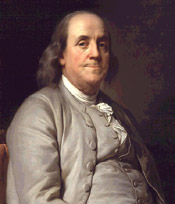