Anthony DiRenzo  »  After the Fair is Over  »

The guidebook suggested taking the steamer because the view of the Fair would be more spectacular from the lake. As a worker in the Smith typewriter factory, and a stringer for Il Risveglio Coloniale, the fledgling paper of Syracuse, New York's growing Italian community, Attilio honored the printed word whenever possible. An aspiring businessman, he intended to supervise the advertising of all his future concerns. The padron had nicknamed the young immigrant Till, because he wielded a pencil with the same ferocity with which he had wielded a hoe in the Canastota onion fields. "Once a muckraker always a muckraker, eh, Tumeo?" But his fellow paisans called him Till because he was money-grubbing and ambitious.

Sucking a caramel, Attilio asked the front-desk clerk to sharpen his pencils and flipped through his pad. A wolfish grin never left his face (his passport since leaving Sicily), and his green eyes danced with delight. After an eighteen-hour train ride from Salt City, a half hour over water would be a lark. Besides, the excursion might get the stink out of his nostrils. Chicago exhilarated him, with its rumbling Els and impetuous architecture, but between the stockyards and the slaughterhouse, the city still smelled like a shambles.

Attilio tipped the clerk, dashed out the lobby, and hopped into a cab. He would have preferred taking a street car, but he already was late, and Mr. Lanzetta, the editor, had told him to spare no expense. The great Marnell, Syracuse's Italian boss, who controlled every guinea vote between Rochester and Utica, was footing the bill. For political reasons, Italy had been barred from the World's Fair, and Marnell wanted as much local representation as possible for Italian Day. He also wanted coverage. Attilio had not been the paper's first choice for the assignment; but the lead reporter had contracted pleurisy, and two others had been hospitalized after a drunken brawl in a Hanover Square saloon. That left Till. The call had come at ten o'clock at Mrs. Daloia's boarding house, and after a midnight briefing, the young man found himself the next morning on a Chicago-bound train. Only a year ago Tumeo had been a grimy sharecropper in Onion Town; now he wore an immaculate white collar and was covering the World's Fair. That was L'America!

By the time the hansom reached the downtown pier, it was nine o'clock. Already the dock was packed with spectators, waiting to be ferried to the White City. Fair officials had projected some 280,000 visitors for Italian Day, October 12, but where were all the Italians? Then Till spotted them---large groups of olive-skinned people crowding the docks. He hadn't seen so many goombahs since steerage. These were the friends and relatives of the workmen who had cleared thousands of acres of prairie muck to create the Fair grounds. All held little Italian flags and sported tricolored ribbons. Greenhorns, Till thought.

They wore Sunday clothes from the Old Country or clean-pressed hand-me-downs from Chicago's mammoth retail houses. Till had visited these midtown department stores yesterday. Eight stories high and three blocks long, they easily dwarfed the lofty palazzi in the Quattro Canti, Palermo's fashionable crossroads. Their sheer size had made Till momentarily forget Chicago's undersmell of offal. Despite the October chill and the dinning traffic, he had stood for hours on State Street with his nose pressed against a showroom window.

A loud whistle startled Till, and his eyes followed a pointing finger as a double-decker steamer, "a whaleback," somebody called it, dropped anchor and clanged its bell. Till could barely decipher the letters on the hull: "WORLD's FAIR STEAMSHIP COMPANY, THE COLUMBUS." The brass railings were decorated with red, white, and green as well as red, white, and blue bunting. As the steamer docked, drums rolled and a cannon fired. The gangplank lowered, and a uniformed band played the Gazza Ladra Overture. Ticket sellers----outfitted in red tunics and carbines---manned the turnstiles and tested their clickers, while the Italians, cordoned behind police, waved flags, shouted, and clapped.

A bearded actor in a cap and poncho descended the gangplank and posed for the crowd. "Viva Garibaldi!" a woman screamed. The Italians cheered and surged toward the turnstiles, chanting "America! Italia! America! Italia!", but the cops herded them into lines. Caught in their wake, Till was sucked toward the turnstiles, clutching his derby, as churning faces exploded and kaleidoscoped: a glass eye, a false tooth, a hairy ear, a fleshy mole. Pores gaped like potholes, nostrils cavernously yawned. Till shut his eyes and grit his teeth, but it was as if a bomb had gone off in a barn. People bleated, brayed, mooed, oinked, quacked, honked, clucked, crowed. The babel of Sicilian and Neapolitan overwhelmed Till, and he felt in danger of losing his English. Defiantly, he shouted the Pledge of Allegiance at the top of his lungs, but the band blared Rossini and garbled his words.

A ticket seller with a brogue abruptly stuck his face in Till's: "Ten cents, damnit!" The freckles showed through the make-up, and the ammo belt jingled with vexation. "A foin thing, isn't it, for a man to be masquerading as a Dago." When Till didn't answer, the Mick snatched the dime from his hand and tore his ticket.

The ride to the White City was a welcome contrast. The steamer lazily chuffed up Lake Michigan, and Till, relaxing, felt the engines pulse through his buttocks. Everything flowed with a dreamlike smoothness. Till sucked another caramel and dangled his feet. The other Sicilians in Onion Town had called him Bonaparte because he was so small and compact. He had a refined, almost ascetic face, in which wonder and calculation were perfectly balanced, and the circles under his eyes were more pronounced than usual. Although Boss Marnell had reserved a comfortable room for him at the Palmer House, Till had been too excited to sleep. Instead, he had explored the hotel in the wee hours---eavesdropping on bankers and salesmen in the dining room, observing the night clerk change a hundred dollar bill, practicing his English over an illicit cigarette with the teenaged bellhops.

One of them, a slick-haired paisan from Gibilrossa, had shown him an onyx-tiled bathroom with golden spigots. Till had played with the faucet all night. Even his family's ancestral estate at Bagheria, for all its Baroque splendor, had never had running water. Efficiency and comfort were unknown in Sicily. Everyone Till had left behind was either a worn-out peasant, dehumanized by drudgery, or a moth-eaten aristocrat, practicing to become a mummy in the vaults under the Cappuccino Monastery. Sicily was an island for the mad and the dead. America was a continent for the sane and the living.

The White City shimmered like a beautiful mirage on the horizon. Till blinked in disbelief. Slowly, Roman colonnades and Florentine cupolas, Tuscan villas and Baroque convents, Neapolitan obelisks and Sicilian minarets, Venetian bridges, canals, and gondolas became more solid and distinct. My God, he thought, have we gone back to the Old Country? The immigrants approached the railing and marveled. One worker placed his arm around his pregnant wife's waist. "Lu vidi? . . ." he said. You see? We built that. Sweating like pigs in winter. Even in January, you couldn't wear a shirt. ". . . Nu chiamavanu animali . . ." Animals, they called; but we built that. We brought Italy to these shores brick by brick.

But it wasn't brick. It was staff, a mixture of plaster of Paris and jute fibers---dazzling to the eye, but never meant to last more than six months. . . 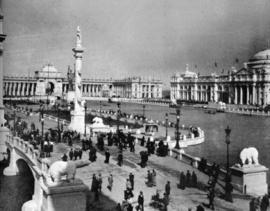 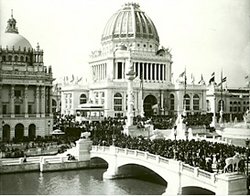