Anthony DiRenzo  »  After the Fair is Over  »

From After the Fair is Over

QUALITY IS YOUR RIGHT!

"The other guys do business with a bill of sales.

Chrysler does it with a Bill of Rights."

I. Every American has the Right to a Quality Car:

When Lido was five years old, Pop ran his Model T into a mounted policeman.  Actually, the policeman ran into Pop.  It was one of those freak accidents destined to plague Lido when he got into the auto industry.  The Ford---purring in neutral in front of the bakery where he and Pop had gone to buy cannoli---inexplicably backfired.  The horse reared, flailed its head, and backed into the car.  Lido would always remember the way the horse's ass buckled and splayed as it landed on the hood.  Blood and shit splattered the windshield.  The cop was all right, but the horse had cracked its skull and shattered its rear legs.  The cop squatted, stroked its forelock, and whispered tenderly into its ear.  Then he shot the horse pointblank between the eyes.  Its huge ass twitched, and the church bells ringing Easter tolled a requiem for its soul.  Lido, his eyes riveted to the fleshy mound of horse ass, didn't know whether to laugh or to cry.

But the cop took it very hard.  Like almost everyone else in Allentown, he was Pennsylvania Dutch, a big-boned, box-jawed guy with hickish hands, and he loved that horse like something raised on his grandfather's farm.  He sobbed and cursed and pounded the hood with his club.  "Dago devil!" he said.  Pop trembled.  It really wasn't Pop's fault, but the cop didn't see it that way.  Neither did the Pennsylvania Dutch judge at the Allentown courthouse.  He slapped Pop with a heavy fine and mumbled something about reckless greasers.  The bailiff, also Pennsylvania Dutch, threw Pop out of the courtroom.  The old man didn't want to discuss it when they got home.  Going to court back then was such an infamia.  But Lido, confused and flustered, pressed Pop for an explanation.

Lido thought of the police horse's enormous buttocks.  "I don't get it," he said.

"A horse's ass is the fall guy.  You don't think Henry Ford's gonna pay for that horse, do you?  So I'm the horse's ass."

Lido still thought of the dead horse's butt.  "You mean you're the culo?"

"The culo of the horse.  The one that fell on us."

Fifty-six years later, buried under an avalanche of cards, letters, and donations, Lee Iacocca remembers these words---and the horse's ass.  Jowly and husky now, just like Pop, the Chairman of the Statue of Liberty-Ellis Island Foundation, ex-President of Ford, CEO of Chrysler Motors sorts mail like an overworked postal clerk.  From one to three, Monday through Friday, Lee bulldozes through immigrant autobiographies, tributes to Chrysler and democracy, crayon drawings of the Statue of Liberty, poems by budding Emma Lazaruses.  In the past three years Iacocca and his miniscule staff have processed some 55,000 pieces of mail.  Give us your tired, your poor, your huddled masses with no return address.  The sheer volume of correspondences has necessitated a systematic approach.  Lee and his staff have it down to a science: slit open the envelopes, gut them, read and stamp the contents, file the letters, sort the checks, record the names and amounts on the data base system, issue another certificate.  Purists call the Foundation an assemblyline of commemoration.  Well, there are always critics.  As far as Lee is concerned, if Ford had had this much quality control in '71, the Pinto would never have exploded.

So why does he feel like a jerk?  Okay, okay, no system is foolproof.  There are always bugs.  Fatigue often breaks the rhythm of the work, and Lee's energy and confidence falter.  At such moments his mind wanders---discontented, bewildered, vaguely guilty---amid the snow drifts of unsorted envelopes.  When daunted, as he is now, Lee thanks God his middle name is Anthony, because St. Anthony is the patron of lost objects and guardian of the mails.  Lee remembers receiving letters as a boy marked S.A.G., St. Anthony Guard.  Mom told him the story of how a poor Italian wife wanted to send an urgent message to her husband in America.  Rent problems or something.  So she went to church, placed a letter in the hand of a statue of St. Anthony, and told him to deliver it.  Three days later she went back to chuch, but the letter was still in the saint's hand.  Boy, did she chew out St. Anthony!  She was so pissed she took back the letter---only it wasn't hers, it was from her husband.  She praised St. Anthony, and 300 gold coins spilled from the sleeve of the statue.

I could sure use a miracle worker now, Lee thinks, because only a saint can deal with all these fucking people.  But saint or not, no matter how backlogged things get at the Foundation, no matter how many urgent calls he receives from Chrylser, Lee reads every scrap of paper and sees every visitor.  The ordeal is as exhausting as the marathon novenas of his boyhood.  The hopes and pains alone overwhelm you.  The letters containing the donations read like bottled messages from castaways.  A Solidarity steel worker, recently released from prison but dying of leukemia, sends two dollars: "For a symbol I will never see."  Seventy-eight Vietnamese in a Thai refugee camp have raised $114.19: "Our humble share for rehabilitation of Statue of Liberty on occasion of hundredth birthday."  Widows and widowers languishing in a Ukranian old age home in Milwaukee send money baked in fruit cakes: "Gorki, gorki. Life is bitter, give us something sweet."  Children of illegal aliens mail rolls of nickles and pennies: "Don't send us back to Guadalajara.  We want to buy our folks a car."

All for the Lady.

Lee thinks of the religious processions back in Allentown, all those goombahs taping dollar bills on the Madonna's statue as the retainers carried it through the street.  The dollars rippled in the breeze.  Pray for us, pray for us.     The Italians who send money turn to the Foundation make a religion out of it.  One natty guy, a Mafioso for sure, with his shades and dark suit, slunk into Lee's office and pledged a million dollars---provided he remain anonymous.  "Penance for my sins," he said.  An Italian granny wrote a check for $10,000.  "I'll pray for you every day," she said, "if you send me a copy of your book."  (Lee still got a kick out of that.  She had just sent him ten G's, but she wouldn't spend nineteen-ninety-five for a book!)  The devotion is heartbreaking.  On the sidewalk, on the bus, in subways and airports, these wizened Italians approach Iacocca and press money in his palm.  Some surrender their life savings in lire---crisp thousand lire notes with Verdi's picture, which Lee will exchange for dollars.  The more devout kiss his ring as if he were the Pope and tell him how proud they are of him.

Tears fill Lee's eyes.  Not from emotion, from strain.  You can't get emotional handling all that mail.  How can you feel for a multitude of strangers?  That's bullshit.  The best thing you can do is sort them out as best you can.  Iacocca feels a new respect for those folks at Chrysler in Customer Relations and promises to raise their salary.  His eyes burn, and he takes another hit of Viseine.  The Foundation is his baby, his personal tribute to Mom and Pop, but there are days when he feels like a glorified paperpusher.  This is one of them.  The most frustrating thing is his inability to prevent all those prayers from becoming paperwork.  Lives are processed into forms, forms bleed into each other.  Sometimes he wonders if it isn't Ellis Islandall over again.  Jesus Christ, they are still processing immigrants!  And Iacocca is still one of them.  The Washington PR squad boast about his complete control of the Foundation, but for all his power, Lee, too, is at at the mercy of bureaucrats.  So much for individual enterprise.  They figure he owes them for the $3.4 billion Congress loaned him.  He was paying for it now--with interest.  Pop was right.  Never go to the government.  Go to the government, and you become a civil servant.

"Lee," the inscription reads, "you're a credit to American volunteerism!"

Pop's voice sounds in his head, loud and clear: "Son, a volunteer is the guy who pays for the horse.

Thanks, Pop. Where were you when I needed you? 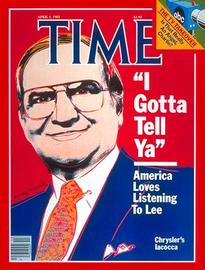 Lee Iacocca chaired the Statue of Liberty-Ellis Island Foundation, until President Reagan dismissed him for criticizing the government.