Chlamydia trachomatis infection is the most common bacterial sexually transmitted disease in the United States. Chlamydia infections that ascend to the upper genital tract can persist, trigger inflammation, and result in serious sequelae such as infertility. However, mouse models in which the vaginal vault is inoculated with C. trachomatis do not recapitulate the course of human disease. These intravaginal infections of the mouse do not ascend efficiently to the upper genital tract, do not cause persistent infection, do not induce significant inflammation, and do not induce significant CD4(+) T cell infiltration. In this article, we describe a noninvasive transcervical infection model in which we bypass the cervix and directly inoculate C. trachomatis into the uterus. We show that direct C. trachomatis infection of the murine upper genital tract stimulates a robust Chlamydia-specific CD4(+) T cell response that is both necessary and sufficient to clear infection and provide protection against reinfection. 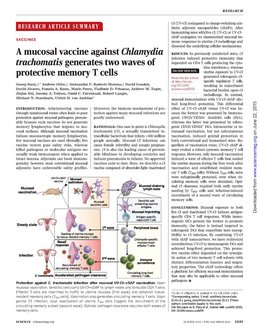