Assosiate Professor Mark Frank, Ph.D, University of Buffalo, has an extensively funded research program that holds promise for the fight against terrorism.

Frank studies detection of human deception and hostile intent through the analysis of nonverbal cues, in conjunction with some of the latest technology and information-mining approaches. His specific expertise lies in the interpretation of nonverbal communication tied to involuntary movements of the 44 muscles in the human face and how they reflect fear, distrust, distress and other emotions related to deception.

A 1993 UB graduate, Frank has his roots in Buffalo where his father served on the Buffalo Police Department for 32 years. He began to develop his identification skills as a bouncer in a Buffalo bar and honed them during years of research by staring at miles of videotape in which those who had been arrested proclaimed their innocence, and hundreds of "volunteer" student liars tried to deceive their interviewers. In turn, he has trained police in departments throughout the world in applying his theories to situations where truth must be established.

He brings to the School of Informatics not only a distinguished research program, but also an outstanding record in the classroom. His work with students at Rutgers resulted in his appointment as one of only 20 "master lecturers" so designated at that institution. 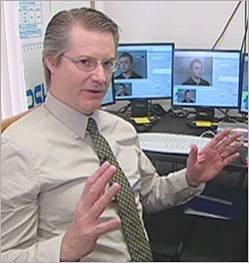