David Brown graduated from Ithaca College with a degree in mathematics. It was during his undergraduate days at Ithaca that he realized mathematics would be a prominent part of his future. Faculty in the the department opened the world of research to him. After finishing graduate work in Dynamical Systems at Cornell University, he was excited to return to teach mathematics at IC and to present the wonders of mathematics to students. He spends great amounts of time mentoring students on research projects, bringing them to conferences to present their work, and writing articles with them. He is always looking for new students with which to work.  In 2008, David was honored with the Mathematical Association of America's Henry L. Alder Award for Distinguished Teaching by a Beginning Faculty Member.

In addition to discovering mathematics during his undergraduate days, David met his future wife, Amy. They now have two children, Jake and Molly. 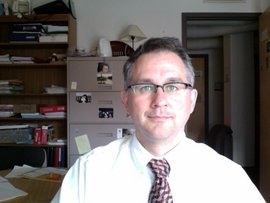 I am part of a team of education, math, and physics faculty who have received a $1.2 million grant to train talented STEM majors to become math or physics teachers in high needs schools.  The grant allows us to provide scholars a $20,000 scholarship for the senior year and $15,000 for the completion of the IC MAT program.  View the press release.  Interested students can contact me at any time.

This excellent video reveals how jumping up in dimensions can help you better understand seemingly complicated operations.