Chris received his PhD from Brown University in 2012 where he was awarded the Presidential Excellence in Teaching Award, a distinction given to one graduate student at the university each academic year. He joined the English Department at Ithaca College in 2011, and teaches introductions to postcolonial and contemporary literatures, as well as upper division courses on the South African novel, and on the emergent genre of the global novel. He is the co-director, with the novelist Eleanor Henderson, of Ithaca's New Voices Festival, a three-day celebration of talented, early career writers. Now in its eighth year, New Voices brings eight writers of poetry, fiction, drama, and essay to campus each Spring for a series of readings and workshops. He is the founder of The Global Modernism Symposium, which he co-organized with Ithaca's Professor Jennifer Spitzer.

Chris's primary research field is contemporary postcolonial/Anglophone literature, especially those texts and authors that cross borders, geographic and otherwise, and become, willingly or not, works of "world" literature. He is particularly interested in the recent re-exploration of theories of world literature as applied to novels concerned with postcolonial politics. His research investigates translation as a conceptual model that explains how novels consider the world, and as well, how those same novels unwind the limitations that the world sets upon them.  Chris has recently published research articles on the theoretical and philosophical concept of the limit in Literature Compass, corporate personhood and Kazuo Ishiguro's novels in NOVEL: A Forum on Fiction, Zadie Smith's novels of style in The Companion to Contemporary British and Irish Literature, and on genre in Ishiguro's canon in The Wiley-Blackwell Companion to World Literature. He is currently contracted to write an article on the controversies surrounding JM Coetzee's novel Disgrace for The Bloomsbury Companion to J. M. Coetzee, and on The Man Booker Prize and post-imperial British fiction for Oxford University Press's Research Encyclopedia. Chris is completing a book manuscript entitled, “At the Limit: The Contemporary Novel and the Ends of Form." With Kelly Mee Rich (Harvard), he is editing a special issue on "Kazuo Ishiguro After the Nobel" for the journal Modern Fiction Studies. With Thom Dancer (U Toronto), he is editing a special issue on "The Novel at its Limits" for the journal Critique. He is a member of the Editorial Board at the journal ARIEL, a Johns Hopkins University Press journal of international literature in English.

In 2018, Chris received the Faculty Excellence Award at Ithaca College for distinction in Teaching, Scholarship, and Service.

“Ishiguro at the Limit: The Corporation and the Novel.” Novel: Forum on Fiction. (1 November 2019)

“What the World Leaves Behind: Ready-Made Translations and the Closed Book in the Postcolonial Novel.” Literature, Translation, and Geography: The New Comparative Horizons. Ed. Stefan Helgesson. London: CSP, 2011: 40-53.

Spring 2018: Senior Seminar: "Theory Now!!"; Eyes on the Prize: Race, Gender, and the Politics of the Booker Prize

Spring 2017: In the Age of the Global Novel; Senior Seminar: Global Modernism

Spring 2013: Approaches to Literary Studies (The Agony and Ecstasy of Theory)*; Honors Program Seminar: The Novel and the Terrorist Aesthetic*

Fall 2012:  Approaches to Literary Studies (The Agony and Ecstasy of Theory)*; In the Age of the Global Novel*

Spring 2011:  Faking It: The Hoax and the Novel; Studies in World Literature:  The Post-Apartheid South African Novel* 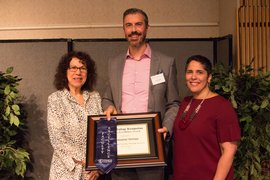 Professor Holmes talks to the Ithacan about Gun Violence