Bruce North was born and raised in Brooklyn NY. The decision to study painting began shortly after entering Miami University. His educational journey continued through the School of Visual Arts NYC, the Brooklyn Museum Art School, a brief rapport with Scenic painting at the Studio of Stage and Scenic Design and eventually on to earn his MFA degree from Vermont College.

An avid outdoors man, in his paintings North prefers to represent the moments of anticipation that precede, or the mellow memory that follows “behind the scenes” events. His investigation of these subjects is expressed with an obvious affinity to the late 19th century French, English and American landscape painters. He is accomplished in several media including, water color, oils, printmaking and charcoal.  Using his painting sketches as source material for larger works and printmaking as a means of elaborating on an initial theme, he enjoys the direct physical process of printmaking in drypoint combined with the atmospheric qualities of aquatint.

As a representational painter he believes that attempting to craft an accurate copy is not nearly enough, the painting must exist in a believable space, and it must reveal a personal truth observed in that moment. Professor North is well known for his landscape paintings of rural New York and his rare sporting etchings have been published nationally. He has had numerous one-person exhibits in New York City, and was awarded a lifelong membership to Grand Central Galleries. A thirty-year association with the gallery’s former director continues with the James Cox Gallery in Woodstock. Bruce has been featured twice in American Artist Magazine and included in “The American Sporting Print, 20th Century Etchers and Drypointists”, and “The Art of Shooting Flying”. His pursuit of personal artistic refinement extends to a lifelong teaching career. In his role as Associate Professor of Art at Ithaca College he teaches Figure Drawing, Intermediate and Advanced Drawing and Introduction to Painting. 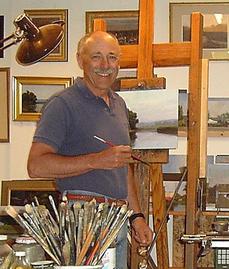