Ithaca College has performed a study of the feasibility for a wind turbine to partially power the Campus.  The college received a $25K grant from NYSERDA to fund 50% of the feasibility study, and contracted with Sustainable Energy Developments Inc., to perform the study.  A temporary meteorological tower was set up in 2008 and came down in 2009.  Wind speeds on South Hill were measured for a period of 6 months.    The final report on the study has been submitted to Ithaca College.  At this point in time, Ithaca College does not have plans to construct a wind turbine in the near future.

Wind Speed Observations up to 50m and Extrapolation to 80m 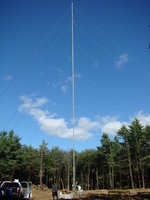 Image of the Temporary Tower (came down in 2009)


This excel spreadsheet contains the calibrated data for wind speeds and directions as a function of date.  Worksheets record observations up to 50m, and an extrapolation to 80m.  Units of speed are in meters/second.