We are currently investigating the nature of the adhesive secretions of a variety of molluscs.  These are gels: they consist of a dilute, tangled network of polymers.  These adhesives are neither truly solid, like a cement, nor fluid, like the water under a sucker.  For lack of a better term, they are often referred to as mucus.  The structure of these gels varies widely, however, and the catch-all term "mucus" is probably inappropriate.  The function of these gels varies widely as well.  Some gels are outstanding lubricants.  Some are excellent adhesives.  Intriguingly, it appears that many molluscs can convert a slippery gel into a powerful adhesive.  Thus, we are comparing the structure of different adhesive gels with the goal of determining the functional significance of structural features.

My contribution to the development of a novel medical glue was highlighted this summer by articles in the Smithsonian Magazine, Science News, PBS and The Washington Post. (See articles below.)

I was a guest on the show "Tell Me Something I Don't Know", a podcast hosted by Stephen J. Dubner, co-author of Freakonomics.

The episode was called "All about bugs (of the animal and computer varieties)" (episode 32). The episode was aired on Oct.22 and is available at the website  http://tmsidk.com/.

I was also interviewed on CBC radio’s weekly science show “Quirks and Quarks”. The show was aired on Saturday May 4th, and Monday May 6th. It will be aired again on Wednesday May 8th at 3pm in selected markets. The interview is also available as a podcast. Quirks and Quarks is an award-winning show heard by a national audience of 800,000 people. The article with accompanying interview is available at https://www.cbc.ca/radio/quirks/stitching-up-surgical-cuts-with-slug-slime-1.5119907 .

My lab students, Chris Gallego  and Becca  Falconer presented their work at the American Society for Biochemistry and Molecular Biology in Orlando, Florida. April 2019.. 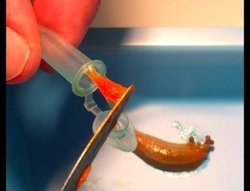 
My lab is studying how slug glue achieves its strong sticking power and flexibility, insights that could be used to create better medical adhesives. 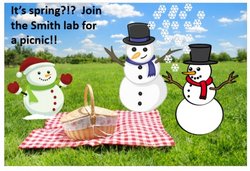