Alexander Shuhan, Professor of Horn, is also a founding member (1993) of Rhythm & Brass, an international touring, performing and recording ensemble. He is principal horn with the Binghamton Philharmonic and the Fort Smith (AR) Symphony and performs frequently with the Rochester Philharmonic Orchestra and the Skaneateles Chamber Music Festival. He also previously served as principal horn of the Cayuga Chamber Orchestra. Recently, Shuhan has begun specialized teacher training that will certify him to be the first Suzuki Horn teacher in the world.

He has studied at Southern Methodist University with Greg Hustis, the Eastman School of Music with Verne Reynolds, and the Pre-College Division of the Juilliard School with Harry Berv. Other teachers include Marvin Howe, Nancy Cochran, John Jacobsen and Henry Babcock.

Shuhan is also an accomplished composer and arranger, having written a number of works for Rhythm & Brass. His composition "Awakenings" is featured on the most recent Rhythm & Brass recording entitled "Inside The Blue Suitcase." 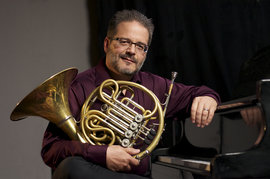