Thanks to the generosity of Marjorie Agosín, the Handwerker Gallery at Ithaca College hosted her incredible collection of Chilean arpilleras from October 22-December 11, 2009. Threads of Hope: The Chilean Arpillera Movement introduced a comprehensive collection of arpilleras, three-dimensional appliqué textiles, that have become the voices of loss and resistance, the keepers of stories and realities that were otherwise censored in Chile during the Pinochet era (1973-90). In response to the arrest and "disappearance" of loved ones--approximately two thousand were killed or disappeared--women formed a movement to challenge the silence and terror while denouncing the atrocities taking place in Chile. The women arpilleristas who have made these emotionally and politically charged quilts have lost loved ones to political oppression and live with an open wound. This exhibit and Marjorie Agosín's visit in 2009 fostered deep and illuminating conversations about Human Rights and the power of human resistance.

burns with rage and cold

picks through the remnants of her dead,

salvages the shroud of her husband

the trousers left after the absences

submerges herself in cloth of foaming, silent blood

and though she is fragile she grows large,

sovereign over her adobe hut,

and determined to tell her story

truer than the tale woven by her

Disruptive and beautiful she

puts together her flayed remnants

and with her disguised thimble

hidden in the pocket of her modest apron

and her harmless needle

she conjures up victorious armies

brings the dead back to life

and the Cordillera of the Andes

of this splendid city. 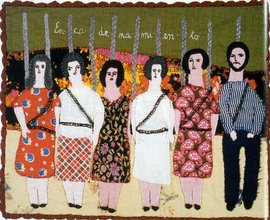