"Democracy cannot succeed unless those who express their choice are prepared to choose wisely. The real safeguard of democracy, therefore, is education." -- Franklin D. Roosevelt

"In a way, it seems like the cruelest joke in existence has been played on us. We became self-aware only to realize this story is not about us." -- Kurzgesagt

Publications with Undergraduates (names in bold):

Saving the Helpless Invertebrates of Topsoil: 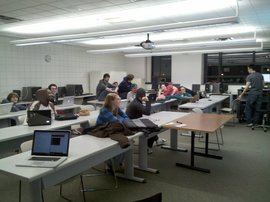